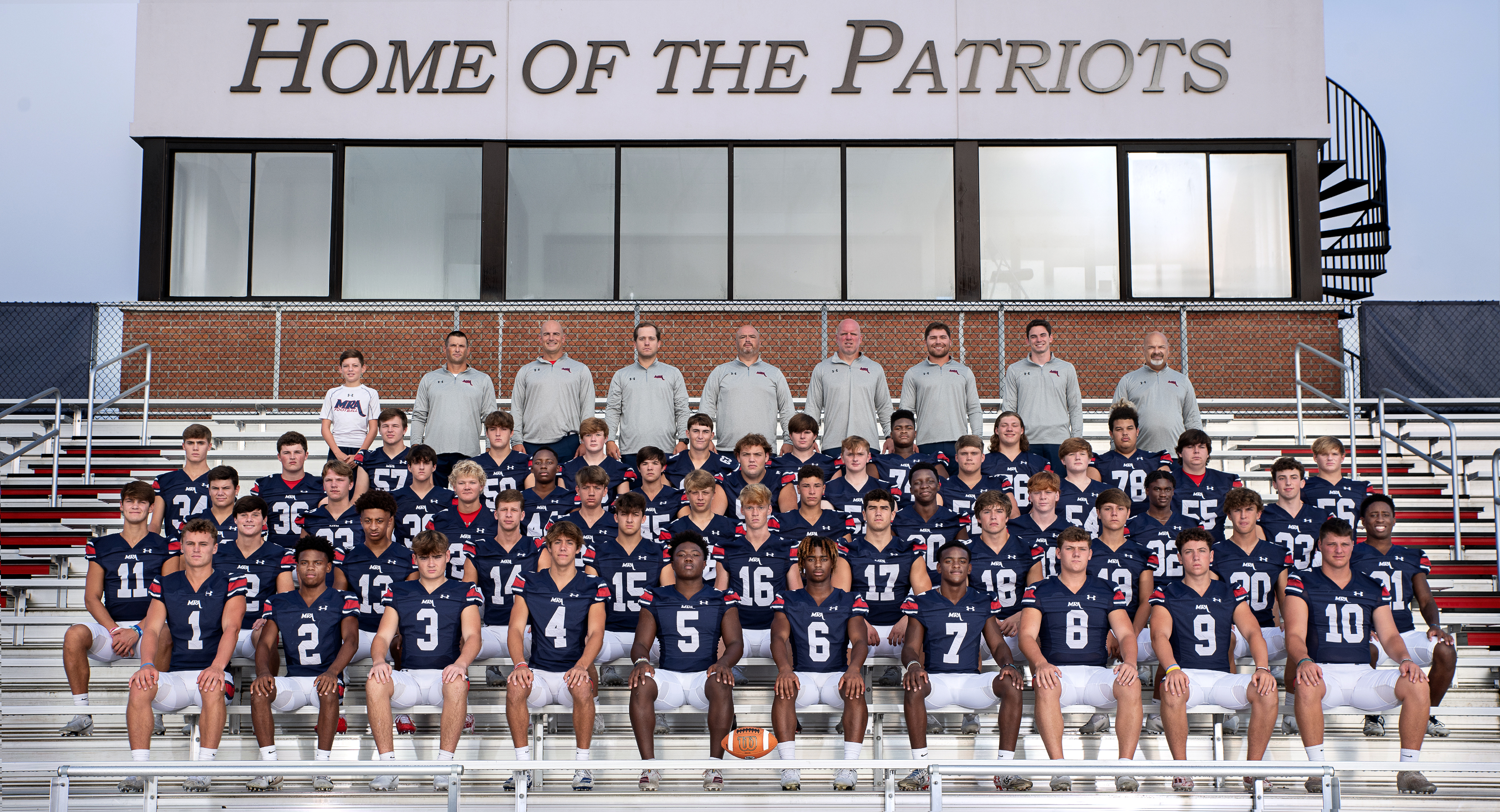 There is a lot to be excited about MRA Football both on and off the field, as the Patriots begin the 2021 campaign. On the field, MRA’s 13 wins in 2020 not only resulted in a second consecutive State Championship, but also set a new school record for wins in a season. This success has led to several renovations at Bank Plus Stadium, “The Home of the Patriots,” to enhance the fan experience, making our house one of the premier facilities in Mississippi. Beginning in 2021, Patriot fans will enjoy a state of the art video board in the south endzone, new scoreboard in the north endzone, and two running playclocks. Moreover, MRA Football is growing into a national brand. Fans can follow the Patriots on ESPN2 when we host the defending 6A Tennessee State Champion Oakland High School Patriots on Saturday, Aug. 28 at 2:00 pm CST. All of these accomplishments add to the legacy of Patriot Football and give us the chance to provide unforgettable experiences for the student-athletes at MRA.

The key to winning is often consistency, and few have won as consistently as Herbert Davis the last few years. Davis is entering his 8th season as head football coach at MRA. Joining the staff is Davis’ son, Hayden, a former Patriot quarterback, who will coach tight ends and linebackers. Also new to the Patriot coaching staff is Jacob Land, who played for Coach Davis when he was in high school. Land will be joining John Weaver as wide receivers coach.

Offensively, the Patriots return three starting wide receivers from the 2020 team. Seniors Davis Dalton, Street Toler and Ty Brooks give this unit the most experience on the field. The biggest question mark for the Patriots entering the 2021 season, however, is who will lead the offense? Currently no one holds the coveted “keys to the Corvette,” and three players, John White, McKinley Woodward, and Ethan Mallett, remain in the hunt for starting quarterback after Winter Training and Spring Ball. Whoever wins the QB1 job, however, will have big shoes to fill. Last season, Zach Beasley threw the ball 228 times for 2,258 yards and 26 touchdowns with just 4 interceptions. The offensive line, coached by Kenny Willians, returns three starters: Rush Bland, Mason McCrory, and Logan Jones. Together these players will selflessly protect whomever is under center and keep all of the Corvette’s pistons firing.

Defensively, the Patriots are coached by Danny White and will need to replace eight starters from last season’s championship unit. Linebacker Stone Balnton and defensive backs Tylor Latham and Cam Covey will give “Danny’s Dawgs” needed experience as they start the 2021 season. The other unit that will feature new players is the defensive line spearheaded by Matt Walker. This unit expects to continue its dominance from years prior winning the line of scrimmage in the trenches. Field position is the key to a great defense and the Patriots return kicker Landon McGee and long snapper Hatcher Swanson on special teams.

Of course, none of this is possible without the 12th Man...YOU! Thank you for being part of the MRA Football Family on Friday Nights and beyond. To the parents, thank you for trusting the care and well-being of your child to our teachers, leaders, and coaches. To the community, thank you for believing in our FAMILY on the corner of Old Canton Road and St. Augustine. The quest for the golden ball begins now!

Herbert Davis
Head Football Coach | Offensive Coordinator | QB’s
Herbert Davis enters his 8th year as the Head Football Coach at MRA. A native of Brookhaven, he has coached 30 years in the coaching profession and 25 as a head football coach. Davis played football and baseball at Copiah Lincoln Community College before transferring to Mississippi College in 1988 where he played baseball and received his BSE in Physical Education in 1990. In 1998 he received his Master’s in Education from Delta State University.

Davis has compiled a 207-89 won-loss record in 25 years of coaching at both private and public schools. He has earned MAIS state Coach-of-the-Year accolades five times in Mississippi (1993, 1997, 2009, 2019, 2020). He also was awarded the 2009-10 All American Football Foundation Gerald R. Ford coaches award. Davis’ teams have competed in the state playoffs 19 times winning five state titles. He is the only football coach in MS to take five different schools to an appearance in the state championship game.

Recently he has taken the Patriots to the state title game six out of seven seasons. Davis and company just posted an undefeated season and conference championship (13-0) as well as back-to-back state championships for the first time in school history.

Davis is married to the former Darla Bullock of Greenwood. They have two daughters Chansley Hodge Spencer, Makenzie Davis Smith and one son, Hayden Davis who serves as an assistant football coach at MRA.

Danny White
Associate Head Coach | Defensive Coordinator | Secondary
Danny White enters his 22nd season coaching football with this being his sixth year at Madison Ridgeland Academy. Coach White also serves as the Middle School Dean of Students. In 2020 MRA’s state championship defense had 21 turnovers, 36 sacks, 9 blocked kicks with a 12-0 record. In 2019 MRA’s state championship defense had 23 turnovers, 39 sacks, 8 blocked kicks with a 12-2 record. Danny previously coached at Belhaven University from 2003-2014. Beginning in 2009, White was named the Defensive Coordinator of the Blazers and carried that role at Belhaven through the 2013 season. In 2012, White’s defense led the nation in pass defense efficiency (84.2) while ranking second in pass defense per game. The Blazers held opponents to 137.1 yards per game through the air. The defense was also 6th in the NAIA in total defense at 271.5 ypg while holding opponents to 17.1 ppg, 10th best in the country. Prior to arriving at Belhaven, Coach White spent four years on the coaching staff at his alma mater, Southwest Baptist University in Missouri. White completed his Masters of Science in Education at SBU in 2001. Danny and his wife, Tamah, have two daughters, Abigail and Amelia, and reside in Jackson MS.

Hayden Davis
Assistant Football | Tight Ends | Linebackers
Hayden Davis is a 2017 graduate of Madison-Ridgeland Academy and will be a student intern at Rosa Scott before he graduates in the fall of 2021 from Delta State University. Coach Davis was a team member of the Co-Lin Community College football team for two years where he earned first team all state honors for playing quarterback. He then enrolled at Delta State University, but due to injury his coaching career started early where he would begin being a student assistant for the fall of 2019 to the spring of 2021 for the Statesmen. Davis has also been in the press box every chance he has gotten to be able to help coach for his dad for many of these past years during his college career and high school career. He is the son of Herbert and Darla Davis. He has two married sisters: Makenzie Smith and Chansley Spencer. He also has one niece: Avery Louise Spencer.

Jacob Land
College Recruiting Coordinator
Assistant Football | Inside Wide Receivers
Jacob Land is entering his first year at Madison-Ridgeland Academy. Coach Land was previously at Fort Worth Christian School (TX) where he served as the quarterback coach and Offensive Coordinator for the varsity football team and was the head track and field coach. Before his stint at Fort Worth Christian, he served as the running backs coach at North Forney High School (TX) for a year. From 2013-2018, Coach Land served as the wide receivers coach at Jackson Prep with the last three years also serving as the Offensive Coordinator.

Coach Land will coach the inside wide receivers and serve as an assistant track coach and teach health. He is married to Jackson native, Kris Roberts.

Matt Walker
Assistant Football | Defensive Line
Matt Walker has been coaching since 2003. He has been at Winston Academy (2003), Madison-Ridgeland Academy (2004-2006), Canton Academy (2006-2012), and at MRA again (2012-2016). He went to Hartfield Academy in 2018 after taking a year off from coaching and teaching. He teaches Economics, U.S. History, & has taught Government, World History, Civics, & World Geography. His football coaching experience ranges from Strength & conditioning, offensive line, defensive line, linebackers, running backs, quarterbacks, Defensive Coordinator, Offensive Coordinator, and Head Coach. He served as an assistant varsity football coach at Hartfield for 2018 & head Junior High coach for Hartfield in 2019.

He came back to MRA in 2020. “It was great to get back to MRA. This place is home!” Walker coaches the Defensive Line for the varsity football team. He also coaches the shot put track and field in the spring.

Matt has been married to Christy Walker since March 13, 2004. Christy has been teaching since 2000. She is currently teaching at Germantown High School. They have two daughters, Mary Tristen (2006) and Mattie Reagan (2010). The Walker family attends Pear Orchard Presbyterian Church in Ridgeland, MS, where Matt has served as a deacon.

John Weaver
Athletic Advancement Coordinator
Assistant Football | Outside Wide Receivers
A native of Vicksburg, John enters his 17th year in the coaching profession. Weaver played football at Delta State University (DSU) where he earned his B.S. in Physical Education, and a Master’s in Education. Before transferring to DSU he played at Hinds Community College and was a member of the 2000 State Championship football team, as well as pole-vaulted for the track team.

Weaver is going into his 11th year at MRA and is responsible for coaching wide receivers for the football team and serves as the Athletic Advancement Coordinator. He also serves as the head boys track coach, where his 2015 team won the state championship for the first time in school history and won the state title again in 2017, 2019, and 2021 as well. John and his wife Kristen have one daughter, Emory who is 8 and is in the third grade at MRA and a son, Luke who is 4 and is in K4 at MRA. They reside in Madison.

This is Kenny’s 8th Season at Madison Ridgeland Academy. He is also the Head Archery Coach at MRA and they won the State Championship in 2017 and 2021 while being State Runner-ups in 2018 and 2019. He is married to the former Lauren Dove of Madison, MS, and they have a 4-year old daughter Elise who is in K4 and a 3 year old son, Grant who will be in K3 at MRA.

No coaches were found for this team.