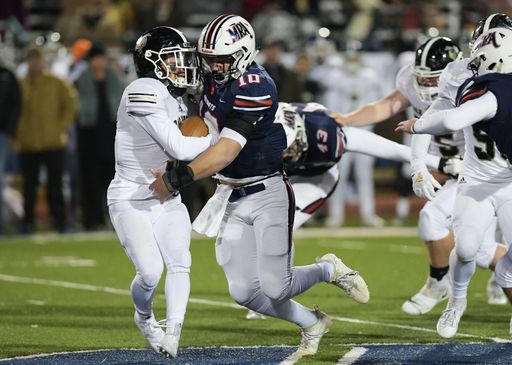 MADISON – It was difficult to decipher what MRA's football players coveted most on this frigid Friday night at windswept Patriot Field – a running clock or a win. A running clock meant getting out of the cold and into much warmer temperatures inside sooner. Meanwhile, a win kept their season alive and clinched a berth in next week's MAIS Class 6A state championship game.

Those two things virtually always go hand in hand, of course, and they did once again as MRA was able to achieve both, cruising to a 42-13 semifinal playoff victory over visiting Oak Forest. The Patriots' second victory over the Yellowjackets in the last 15 days sets up a highly-anticipated, winner-take-all battle royale against rival Jackson Prep Saturday at Mississippi College's Robinson-Hale Stadium. Kickoff is slated for 6 p.m.

"It was definitely cold out there tonight, everybody was freezing," MRA wideout Russ Sceroler said. "It was good for everybody - the fans, the coaches, the players – to get the running clock as soon as we could and get out of there. Now we can turn our focus to Prep."

MRA didn't simply beat Oak Forest, as it did (21-7) just two weeks ago in Amite, La. This time, with 16 seniors playing on their home turf for the last time, the Patriots crushed the Yellowjackets by 29 points, jumping out to a 28-0 halftime lead in the process.

Now, after 13 games and countless hours of practice, lifting weights and watching film, there's just one game left. Forty-eight minutes, perhaps more, and seven-time reigning champ Prep is all that stands between MRA and the program's third state title and first since 2004.

Here's a good spot to say let the countdown begin. However, that clock has been ticking ever since Prep beat MRA 33-27 in last year's championship game, avenging a 42-21 loss during the regular season. Both teams expected to arrive at this destination – Prep is making its ninth straight title game appearance, MRA its fifth in the last six years – and they have. As most pundits predicted before the season began.

MRA once again won the regular season meeting this year, winning 34-22 at Flowood. Will history repeat itself? Or will the sequel have a different ending. Only time will tell. Tick, tick, tick . . .

"This is the game we've been looking forward to all year," MRA linebacker Willie Latham said. "We've been practicing all season with an eye on getting back to the championship game. I wasn't here last year, but all the guys have been talking about last year and what happened in that (championship) game. It makes me want to come out with the win even more."

MRA, 11-2, will carry a six-game winning streak into the title game. The Patriots have won 23 of their last 26 games dating back to last season, with the lone loss within the MAIS coming against Prep. Coach Herbert Davis' team is averaging 38.9 points per game and allowing only 12.5.

Prep, meanwhile, is 10-2 and coming off a 28-14 victory over Jackson Academy in Friday's other MAIS 6A semifinal.

"We've got to go in and do what we do," Davis said. "We need to stay composed, stay confident, and go in and execute. "It's all about us believing in what we're doing, continuing to try to get better, and correcting some things. And we're going in with a little chip on our shoulder, hopefully.

"We thought we made some adjustments from the first time we played (Oak Forest)," Davis continued. "We didn't get the ball vertical very much the first time we played them, but we were able to do that a few times tonight and that worked out well for us. The same holds true this week. We'll have to come up with some new wrinkles against Prep because you know they are going to be well-prepared. They do a good job with that. We've got to find ways to run the football because that sets up everything else, even though tonight was just the opposite."

Indeed it was. The only thing hotter than Philip Short and the Patriots' passing game in the first half was the hot chocolate at Big Dave's concession stand. Over 500 cups were sold by the way. Short, MRA's record-setting quarterback, threw for 238 yards and three touchdowns in the first 14-plus minutes as Davis elected to throw early and often in the first two quarters.

"We got hot throwing it," Davis said. "I thought we played real well early and came out and got the lead, and then as we do sometimes we got a little complacent. But for the first quarter and a half we couldn't have played much better. Coming out and getting the lead early the way we did really set the tone for the whole game."

Short threw a 21-yard scoring strike to Colorado commit Joe Perkins on the fourth play of the game, and connected with his favorite big game target once again on the third play of the second quarter – this time from 43 yards out – as the Patriots jumped out to a 21-0 lead. Latham's seven-yard touchdown run was sandwiched in between those two Short-to-Perkins scores. Short's third touchdown pass of the night, a 10-yarder to Tyler Starnes, made it 28-0 with 9:40 still remaining in the first half.

"Our offensive line did a great job up front, Philip did a good job of going through his reads and everybody did a good job of coming out explosive, coming out fast," Perkins said. "That's one thing we've got to do in the state championship game, come out fast and explosive and keep pounding until the clock reads all zeros."

Said Short: "(Oak Forest) does a good job of controlling the clock and time of possession. That's what happened the first time we played them, and we didn't get a lot of offensive possessions. That allowed them to hang around a little bit. This game we tried to come out firing on all cylinders. We wanted to come out and leave no question about it."

At that point, it essentially was not a matter of what if, but by how many. And how soon could the Patriots get a continuous running clock, which is enacted by the virtue of the mercy rule. That moment was pushed back, however, as MRA failed to cash in on its final drive of the first half and initial drive of the second half despite being set up each time by a turnover. Oak Forest then drove 85 yards on 18 plays for its first touchdown of night to make it 28-6 late in third quarter.

MRA finally got the running game going early in the fourth following yet another Oak Forest turnover. Drew Horton piled up 62 of his 80 yards on the Patriots' next drive, ripping off runs of 34, 6 and 22 yards. The latter was good for a touchdown, extending the lead to 35-6.

"I don't get that many carries, so I try to make the most of each one of them," Horton said.

On the very next play, Sam Polles got his second interception in a two-minute span and raced 40 yards for a pick-six. The 42-6 lead prompted "Run that clock!" chants up and down the MRA sideline.

"That was fun," Polles said. "Those are the types of plays you look for in a game. I looked up and the ball was right there, so I went up and high-pointed it and came down with it. The defense didn't give up, they blocked for me down the field, and I was able to punch it in."

MRA's defense didn't come away with any takeaways two weeks ago in the 14-point win at Oak Forest. Friday, Danny White's crew generated five turnovers – four interceptions and one fumble – and a defensive touchdown to boot to go along with a second goal line stand in as many games. The Patriots have 24 takeaways on the season (11 fumble recoveries, 13 interceptions) vs. only eight turnovers. Those takeaways have led to 130 points, including seven defensive touchdowns, five of which have come on interception returns.

"The turnovers were big," Polles said. "That's something Coach White always harps on in practice. Strips, interceptions, any way you can get a turnover get one."

MRA only forced one turnover in the regular season win at Prep. It was a big one, however, as Perkins' 35-yard pick-six midway through the fourth quarter gave MRA a two-touchdown advantage. MRA added another touchdown with 1:25 left to go ahead 34-14, followed a Prep touchdown and two-point conversion with :43 seconds left for a 12-point final margin.

MRA did an excellent job of bottling up Prep's standout running back Matt Jones (11 carries, 13 yards, 1 TD) in that game, something the Patriots will likely need to do again if they hope to walk away with the championship trophy late Saturday night in Clinton. Clean special teams play will also be a must.

"It should be fun," said MRA defensive back Hayes Puckett, who also had an interception Friday. "Anytime you can play for a state championship it's a great thing. Prep is always a new team in the championship. We know they are going to be ready, but we're going to be ready, too. We're coming in with a different mindset than we did last year. We remember what happened last year, and we don't want to have to experience that again."

Perkins, along with the rest of the MRA seniors, stuck around afterwards and soaked in the moment – their last at Patriot Field. He left the field laughing and joking with his dad and one of his best friends before sprinting off one last time.

"I'm really proud of the guys," he said. "It's a great group of brothers. I feel like we've got a special class. To go out there on that field one last time with those guys knowing that this is the last time we will do that together, it was special. Everybody is going to go their separate ways when all this is done. The memories we share together are going to last a long time, though. I can look back and think of January and getting in our offseason work. Look at us now. It's November and we're in the state championship. We know who we are playing. But we also know we've got a chance to do something special. We've got a chance to break that streak and bring a state championship here to MRA, something that hasn't been done in a long time."