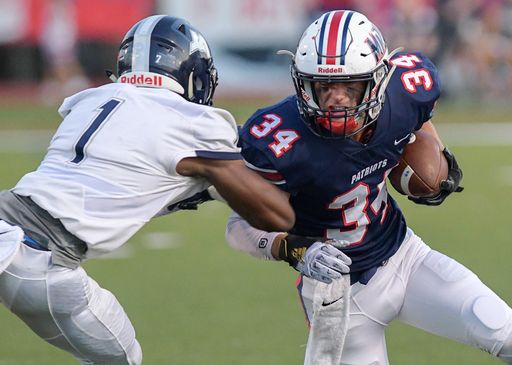 MADISON – With about five and a half minutes left before halftime, MRA quarterback Philip Short jogged over to the home sideline and shouted "Put the ball in my hands! Trust me!"

The senior signal-caller demonstrated once again Friday night why that's a really good idea, throwing for 333 yards and four touchdowns and also adding a scoring run for good measure as MRA raced past rival Jackson Academy 48-7 at Patriot Field.

Short, the reigning league Offensive Player of the Year, completed 19 of 29 passes, accounted for five touchdowns, and turned in the play of the night on a humid evening filled with one big play after another. With MRA clinging to a 7-0 lead about three minutes deep into the second quarter and facing a 3rd-and-10, Short did his best Steve McNair circa Alcorn State in the early 90's impression. After taking the snap from center in the shotgun, he scrambled to his left with two defenders in pursuit, side-stepped another, then as he was being chased by a host of JA defenders ran up the field to his right and off one leg deftly tossed a 25-yard touchdown pass to a wide open Tyler Starnes. He got hit on the play just as he was releasing the ball, making the highlight-reel worthy play all the more impressive.

"Oh man, I don't even know on that one," Short said, with a chuckle. "I saw Tyler in the back of the end zone so I was just trying my best to get him the ball. We do scramble drill every day in practice, and it came to fruition in the game tonight on that play. My coaches always tell me to roll out, roll out if the play's not there. That's what I did, and that's what happened."

The Patriots went vertical often against the out-manned Raiders, who had no answer for Short and Co. Short threw touchdown passes of 30, 25, 36 and 31 yards to go along with non-scoring completions of 36, 50 and 35 yards among others. He spread the ball around to seven different receivers, throwing touchdowns to three different ones operating behind an ever-improving offensive line.

"I about had a heart attack all week worrying about the O-line," MRA head coach Herbert Davis said. "I went over there and told them I'm proud of them. They did a great job. They've come a long ways. We've still got to get better there, but I'm proud of those guys. They've had to endure some butt chewings this week in practice. (JA) tried to blitz us all night long, and they gave us good protection. They picked up those blitzes, leaned those big bodies on them, and did a great job.

"We made big plays," Davis continued. "They tried to play us man . . . we did a good job of hitting the underneath stuff. But, when we got our chances to go deep we're going to take them. And we did a great job executing that tonight. Our receivers made some incredible catches, too. We had guys making big plays. I can't take any of the credit for that."

MRA (4-0 overall, 2-0 conference) has won 16 of its last 17 games dating back to last season. The Patriots, wrapping up a three-game homestand before hitting the road for the next three weeks, haven't lost a home game during that stretch.

MRA has now taken five of the last six in the series, including back-to-back blowouts the past two seasons by a combined score of 89-13. The Patriots got the running clock they were looking for, although it took them a little longer to achieve that goal than it did in their first three games of the season in which they outscored their opponents 130-3 in the first half and 146-16 overall. In fact, Friday night marked the first time Short and several of the other starters have played in the second half this season.

Short exited with just under eight minutes remaining after flinging a 35-yard completion to Landon Fulcher. The Patriots scored five plays later on an 8-yard run by Rayf Vinson to cap the scoring and put the continuous running clock (mercy rule) in motion.

"This game felt great," Short said. "It felt like a football game - four quarters of hard battling. I got hit a lot. I like to go home with some bumps and bruises, and be a little sore. This is my first time feeling that in a while."

MRA marched 80 yards on eight plays to start the game, capped by Short's 30-yard touchdown pass to Justin Williams. The score remained the same until a few minutes into the second quarter when Short turned in the aforementioned dazzling 25-yard scoring pass to Starnes, giving the Patriots a much-needed bolt. JA scored its lone touchdown a little over three minutes later courtesy of a 63-yard touchdown pass from Andrew Holmes to Chase Rush, cutting the deficit to 14-7.

It was all MRA after that, however. Short connected with Russ Sceroler on a 36-yard scoring strike three plays later to push the lead to 21-7. Then, shortly thereafter Vinson intercepted an errant pass from Holmes and raced 28 yards for a touchdown to extend the lead to 28-7 with just over four minutes remaining before halftime.

It marked the second straight week the MRA defense scored a touchdown via an interception. A week ago against Copiah, Williams, pressed into a starting role at cornerback, intercepted a pass and went to the house from 65 yards out.

"I was just standing there and he threw it right to me," Vinson said.

MRA pushed the lead to 35-7 on its opening drive of the second half as Short once again connected with the jet-quick Starnes, this one covering 31 yards – seemingly putting the game out of reach for good. The Patriots also scored on their next possession as Short darted into the end zone from seven yards out to make it 41-7. It was Short's first rushing touchdown of the season, and just the fourth since arriving at MRA. Better known for his passing prowess, Short displayed much-improved running and scrambling ability Friday night, looking more mobile than at any point last season. In other words, he's bigger, stronger and better than he was a year ago when he took the league by storm as a junior after transferring to MRA from Northwest Rankin.

"It was a heavily-anticipated game tonight, a rivalry game," Short said. "Ride or die I want the ball in my hands. We've got a great system, and I have really good players around me so that makes my job a lot easier. When we are clicking like we were tonight at times, there's not a whole lot you can do."

The 6-foot-1, 220-pound Short has thrown for 957 yards and 12 touchdowns this season against no interceptions. Keep in mind, he only played a half in three of the Patriots' four games. In 17 career starts, he's thrown for nearly 4,000 yards and 46 touchdowns. He's on pace to break the school record in both statistical categories.

Here's another stat for you: 34 of his 46 career touchdown throws have been 20 yards or longer. In total, he's completed 77 passes of 20-plus yards. Short has surpassed the 300-yard passing mark five times, and now has four games in which he has thrown four touchdown passes.

"Philip has a cannon," Sceroler said. "He's got a special ability that only a few dudes have."

Said Starnes: "We have 100 percent confidence in Philip. We may have some problems, but he's definitely not one of them. If the O-line does their job and the receivers do our job, we know that Philip is going to make the right read and drop a dime somewhere."

Minus the long scoring play by JA, the MRA defense played lights out once again. Hasley had a big night running the ball, too, finishing with a career-high 117 yards on 17 carries. The receivers made a lot of really good catches in traffic, too. No doubt, it takes an entire team to make a team go, especially as good as this MRA team is. However, Short is clearly the maestro. He makes it all work.

Friday night's game was a perfect illustration of how it looks when one team has an exceptional, seasoned quarterback, and the other one doesn't. JA is playing without its starting quarterback, Jackson Conn, who was injured prior to the season. As a result, Holmes, the backup, was pressed into duty. While MRA reached its season average in points per game, the JA offense struggled mightily sans the one long touchdown pass.

The Raiders had 106 total net yards at halftime – 28 rushing, 78 passing, with 63 of those coming on one play. They finished with 135 total net yards of offense and turned the ball over twice, each leading to MRA touchdowns. MRA defensive coordinator Danny White's bunch came in allowing only 93.3 yards per game, including allowing only 38 net yards a week ago against Copiah.

"Our defense is playing great," Davis said. "We gave up one that we probably shouldn't have, but we did. That's really the first touchdown our first-team defense has given up all year long. Those guys are carrying us right now. They're doing a great job."

"I'm proud of our kids," Davis said. "We played our tails off. We need to get better at some things . . . we made some mistakes. But, we kept battling and we made some big plays on offense. They kind of stuffed us some early on, but we found the right running play about the middle of the second quarter and we just went downhill on them. Then I thought our conditioning took over in the second half. We got what we wanted in the second half."

Somewhat lost in all the excitement of trouncing JA for a second straight year was the fact that running back/defensive back Tyler Latham suffered a knee injury in the early going and didn't return. The extent of the injury is not known at this point. The super sophomore, who has four rushing touchdowns this season, is slated to undergo an MRI early next week.

MRA's next three games are all on the road at Bayou Academy, Philadelphia High and Briarcrest Christian.

"We're going to try to keep it rolling," Short said.