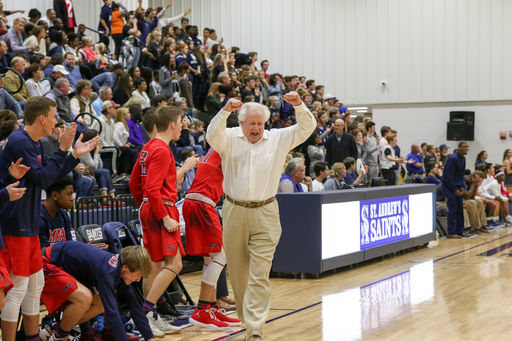 McCOMB – Richard Duease and Norris Ashley's paths have crossed only twice through the years. In the late 1960's, Duease, then a player at Indianola High School, faced off against Ashley, who at the time was a young coach at Coahoma County. And several years ago, the two were seated at the same table during an award banquet in Tupelo.
The two coaching legends have never coached against each other, however, and really don't know all that much about one another - other than the fact that they've both won a lot of basketball games between them. In that regard, despite their relative unfamiliarity with one another on a personal level, their names will likely always be intertwined in Mississippi history when it comes to high school basketball.
Duease surpassed Ashley as Mississippi's all-time winningest basketball coach on Friday night as MRA cruised past Jackson Academy 74-45 in the 5A State Tournament at Parklane Academy in McComb. It was win No. 1,698 for Duease, one more than the former Ingomar coach, Ashley, who after a 43-year career retired in April of 2012 with 1,697 wins.
"For me, it's an honor to even be mentioned in the same sentence with Norris Ashley," Duease said following the game. "He was a great player, and he was a great coach for a long time. I have the utmost respect for him and for what he accomplished during his career."
Ashley and his wife of 45 years reside in the tiny northeast community of Lonestar, about eight miles west of Ingomar in Union County. He has been the leader in the clubhouse in regards to total wins in the Magnolia State since retiring. No longer. The Patriots played exceptionally well on both ends, paving the way for the milestone while also punching their ticket to Saturday's 7:15 p.m. championship game opposite Jackson Prep.
Duease's squad connected on 11 3-pointers, came away with 16 steals, and forced 21 turnovers leading to 36 points. Freshman Josh Hubbard led the way with a game-high 30 points, 26 coming in the first half.
"We played with a lot of energy and fire tonight," Duease said. "I really liked the way we played defensively. That was one of our better games all year. We'll have to play that way again tomorrow if we hope to beat Prep."
After the game, Parklane officials acknowledged Duease's accomplishment, presenting him the game ball at midcourt. Once the presentation was over, Duease tossed the ball in the direction of his players, who were gathered on the court just a few feet away.
"That was fun," Duease said. "That's what it's all about, being able to share moments like that with your team. And my wife, Kim, was here, also. So that was nice."
Duease, who earlier this week celebrated his 68th birthday, is in his 45th year coaching. The majority of those years have been spent at MRA – 38 to be exact. He arrived at MRA in 1982 and coached boys and girls through the end of the 2002 season. He's coached boys only since then. He has amassed 1,106 boys wins and 592 girls wins. According to MaxPreps, Duease is the third winningest active coach in the country.
He is chasing his 39th state championship as a boys and girls coach, and seeking his 15th Overall title. In 2017, Duease became the winningest boys coach in Mississippi history, surpassing Ashley's mark of 1,023.
"Funny thing is I contributed to Ashley's winning record," Duease explained. "We lost that game when I was at Indianola as a player . . . I was a 10th or 11th grader at the time, and he was coaching Coahoma. They hit a shot at the buzzer to beat us."
Duease, the first inductee into the MRA Sports Hall of Fame, has been the face of MRA athletics for as long as most can remember. Also the school's athletic director since 1994, he has helped shape the future of hundreds upon hundreds of MRA children – and now their children – for nearly four decades.
By all accounts, the players always come before the numbers for Duease, now the man with the most victories in the history of Mississippi basketball.
"That was pretty cool tonight, playing as well as we did and seeing Coach Duease get the record," MRA center Trent Coleman said. "He deserves it. He's been coaching for a long time, and has won a lot of games. I know I've enjoyed playing for him this year. He's taught me a lot. It will be special being able to say I played for the coach who has won more games than anybody in this state ever has. We're going to come out tomorrow and try our best to give him another state championship, too."