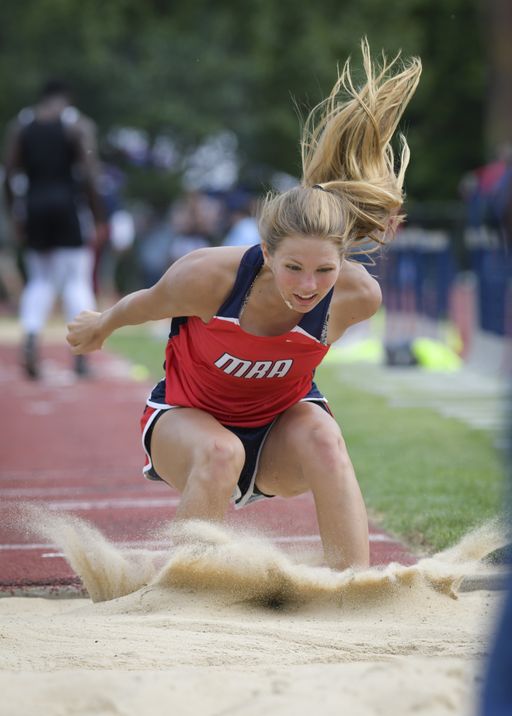 One follower included the hashtag #TrackSchool at the end of her post. While that may be somewhat debatable – longtime MRA boys basketball coach Richard Duease, for one, may have an argument considering the numerous games and championships his teams have won over the last three-plus decades – she certainly may be on to something.

After all, the Lady Patriots have now won back-to-back state championships. The Patriots, meanwhile, have won three of the last five. Not to mention the fact that MRA also swept both titles at the junior high district meet a few weeks ago. Clearly, MRA has emerged as a major player when it comes to track – girls and boys.

MRA coach Melanie Black remembers a time not so long ago in which she had a hard time convincing girls to come out and/or stay out for track. The Patriots, on the other hand, hadn't won a state title in track prior to coach John Weaver pulling the trick in 2015. Look at both programs now.

There they were Saturday, on center stage, at the end of a long, rain-filled day, collecting trophies. First, it was the girls' turn, followed shortly by the boys. The Lady Patriots won in dominant fashion, tallying 192 points, bettering runner-up Jackson Prep by 22.5 points. While things were more nip-and-tuck on the boys' side throughout most of the day, the Patriots emerged from the pack with 173 points, 18 points more than runner-up Jackson Academy.

"Both teams winning made it even more special," Black said. "It's a big accomplishment for both of our programs and the school. A lot goes into winning one, much less two (titles) in the same year. I'm super proud of the girls and boys."

Said Weaver: "It just goes to show you what type of kids we have . . . we some great kids on both teams. They come to practice every day, they work hard, and they're willing to do whatever it takes to get better. And that competitive edge carries over into the meets. It's important to them."

That was evident throughout the course of the two-day event, never more so than near the conclusion of Day 2. Leading by 20.5 points leading into the final event of the meet – the 1600 meter relay – the Lady Patriots could've easily chosen to coast through on their way to the title. That's just not in their collective DNA. With Laurel Fulcher providing a gutsy final leg on the heels of Hunter Thompson, Evie Ewing and Lily Kate Farrar, MRA won the final event with a school record time of 4:11.06 – adding the proverbial cherry on top to the youthful Lady Patriots second title in a row.

"They are competitors," Black said. "All of our girls are. They have such a competitive spirit. I knew once they got out there and started running, they weren't going to settle for anything less than first place. They didn't have to win that race, we didn't have to have it. And they were tired. Their legs were dead. But they wanted to win it. It was a great way to finish it. That put an exclamation mark on an outstanding performance."

Likewise, the senior-laden Patriots also had the title wrapped up prior to the 1600 meter relay. While the quartet of Russ Sceroler, Luke Barr. Landes Purnell and Walker Watters didn't win the event – they came in second - they did run a season-best time of 3.35.89 to run the Patriots team total to 173 points. It's the most the boys have ever scored at the Overall meet. MRA compiled 80 points in the field events on Friday, building a 14 point lead over second place JA entering Saturday's running events.

"I'm super proud of our guys," Weaver said. "We only won one race on the track, same thing we did in 2017 when we won it. There's a lot of pressure when you've been leading pretty much the whole time. Our lead s got down to nine points at one time. There was a two-hour stretch or so where nothing was going right for us. I thought the (second) weather delay helped us. I gathered them on the bus, told them to stop pressing, and just do what they were trained to do. I thought that helped us regroup. We were able to come back, settle in, and go ahead and win it."

The Lady Patriots carried a 12.5 point lead over Jackson Prep (69-56.5) into the running events. They proceeded to win the first three events on Saturday – Fulcher in the 300 meter hurdles, Alex Cullom, Thompson, Ewing and Fulcher in the 800 meter relay and Savannah McIntosh, Lydia Snopek, Sloane Vinson and Everett Heard in the 3200 meter relay – to build a 24.5 point lead and were never seriously challenged the rest of the way.

"I thought that really set the tone for the day, us winning those first three events like we did," Black said.

That's a combined 129 points that those three girls were a part of on Saturday.

"Our sprinters did everything today," Black said. "And our distance runners, who were a question mark coming in because of all they had been through this year, really came through for us. They were real troopers running out in the rain the way they did today. It was a total team effort for us, going back to the field events on Friday."

The same can be said for the Patriots, who wouldn't have been where they were without Will Seabrook coming up huge on his last toss of the day to vault into a second place finish in the discus on Friday. Or Jake Flynt finishing third in the shot put despite the fact that he hadn't thrown in a meet the entire season. Or little-known Will Triplett finishing third in the 3200 meter, shattering his personal best time by a 17 seconds. Or Walker Watters placing second in the 400 meter dash. Or Will Fairly getting second place in the 800.

The list of heroes goes on and on . . . "It was a gutsy performance by all of our kids," Weaver said. "I thought our seniors really stepped up."