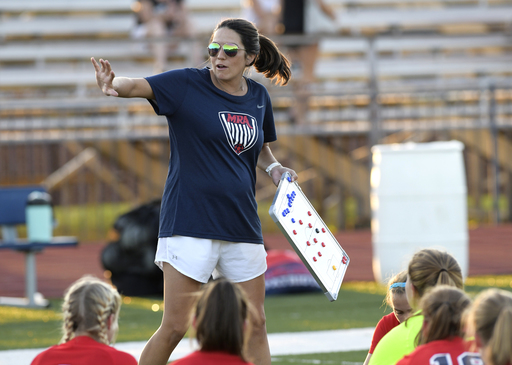 MADISON – Nobody knows Lauren Stratton better than Libbo Crosswhite. The two have been lifelong friends dating back to their childhood school days at MRA. So there's nobody better to get an amusing backstory on the MRA girls' soccer coach than Crosswhite herself.

"Soooo," said Crosswhite, already chuckling. "Back in elementary school she would only wear windsuits. She wore a different one every day. She was the only girl who would play soccer all recess long. All the girls were terrified of her. She was the most intense athlete, even at an early age. Part of the reason I became friends with her in middle school is because I knew she would protect me if anyone tried to harm me. Her intensity, all the way through high school to college has always been who she is."

Anyone who knows Stratton knows that still rings true to this day. She gets real intense on the sideline coaching the Lady Patriots, although she's been forced to mellow some this season as she is coaching for two. See, Stratton is due to give birth Nov. 11, some 83 days from now.

She's not about to sit still, though. Not now. Not in the heart of soccer season. Not when she's coaching possibly the best team in the MSAIS, one currently undefeated following a 3-0 win over three-time reigning State champion Jackson Academy this past week. The Lady Patriots, 5-0, have outscored their opponents 21-2 entering Thursday's home match against Jackson Prep. And one of those two goals came in the waning minutes with her team comfortably ahead.

"I've definitely had to scale back some," Stratton said. "I can somewhat control my blood pressure and the intensity, but it's going to come out. That's just who I am. Fortunately, my assistant coaches are really good at reminding me. They can tell when I get too worked up. It has definitely been an adjustment, though. It makes for an interesting situation for sure."

This is not the first time Stratton has coached through pregnancy. She did the same thing a couple of seasons ago while carrying her first born. Bo will turn three in November. So she can draw from that experience at least.

"Yeah, this is my second go-around," she said. "The timing . . . everybody asks why. (MRA athletic director) Coach Duease always asks me why do I choose to be pregnant during this time. He just likes to give me a hard time. If you think about it, there's a pretty small window from one season to when we start practicing again for the next season. I like to try to hit that window. The first go-around it was all so new it wasn't that bad. This time it's been a little more difficult."

The main reason? The extreme heat. Soccer practices take place in the afternoon hours after school, as do most of the matches. The temperatures have peaked in the mid-90s, and it's usually at least 10 degrees warmer on the turf at Patriot Field. That makes life difficult on everyone, especially Stratton, who has a baby on board. She actually became dehydrated one day last week, drawing the ire of her doctor.

"That was bad, but I came back from it," Stratton said. "(Doctor) knows how intense I am, but she also knows how much I love the sport. She understands the competitiveness, she understands the coaching aspect. She hasn't really given me that many restrictions. That's really her main concern, is making sure I stay hydrated. With this pregnancy, as opposed to the last one, I can tell when I've pushed myself too far and I stop. I'll pull back."

While super excited and appreciative of the opportunity to bring another child into the world, the pregnancy has forced Stratton to make adjustments in her coaching, including being a calmer presence on the sideline. She has leaned on her assistant coaches and players more to help with the daily tasks of preparation. Taking care of a child during the season is one thing, but carrying a child inside the body during the season is entirely different. While pacing the sideline, the occasional movement of a growing baby inside her reminds her of the changes taking place during her nine-month journey.

"Honestly, I know the health of the baby is way more important than high school soccer," Stratton said. "But, at the same time, I'm trying to coach my team the best I can, like I always do. It definitely adds a challenge to it. The girls say I'm meaner and less patient, and they run more. I don't know if any of that is true or not."

Stratton has found herself sitting down a lot more during games this year. She's letting the girls "just play." If she needs to make a change, she subs a player off to talk to them instead of yelling across the field. Coach and players alike say the change in style has proven beneficiary. Hard to argue with the results so far.

"She sits down on the bench now lots more than she used to which is different because she used to follow us up and down the field yelling at us and we were all like what is she doing," said senior co-captain Mary Rogers Coon, who had a goal in the win over JA. "Now she's more chill and just letting us play our game, and it's working out pretty good.

"Honestly, this is the most fun year we've had," Coon continued. "I loved playing with all the girls I've played with in the past, but it seems like we have a better chemistry this year. Obviously, the win over JA was a really big deal. We were all really excited about it. We've been playing really well, and the chemistry is really good."

The parts certainly fit. It starts up top with speedsters Evie Ewing and Hunter Thompson. Ewing, a freshman, and Thompson, a sophomore, have scored six goals apiece, combining for over half of MRA's goals. Both are members of the Lady Patriots' back-to-back Overall champion track and field team. Both can fly. A lot of their goals have come late in matches after opposing defenders get winded after chasing them around the entirety of the 80-minute match.

Sophomore Lily Kate Farrar provides similar speed in the back.

"Speed is hard to beat," Stratton said. "You can't coach it. When you have their type of speed up top it makes for such a dynamic attack. Most teams are going to have one really fast girl on the backline, and they usually man mark with that girl. Last year Evie was hurt, so they were able to man mark Hunter which really shut us down. This year they can't man mark both of them. There's usually not enough speed to do that. Lily Kate saves us on the back end tracking people down. That's huge, too."

"Sarah Margaret is on another level good," Stratton said. "When she steps on the field it's a totally different mindset. She is one of the most competitive girls in the entire MSAIS. Being a goalkeeper one of the things you have lot of is one v. one battles, and it comes down to I'm better than you and I'm going to stop you. Sarah Margaret has that instinct. She's really matured this year, and she's got more confidence. Last year, she had the ability and the skillset, but being a freshman she lacked some of the confidence on decision making. This year you see there's no lack of confidence. She knows what she's supposed to do and she's going to do it."

Not only are the Lady Patriots good, they're young. Turnipseed, the other captain, and Rogers are the only seniors in the top 11. Stratton's bunch is chasing the program's second ever State championship and first since 2012. The shutout victory over JA was a huge confidence builder. Thursday's game against Prep, also a perennial power, will serve as yet another measuring stick.

"We'll know more after the Prep game," Stratton said. "But I really feel like if we keep playing the way we've been playing, and getting the same type of results, we're the team to beat this year. We don't have that many weaknesses, if any, and we've got more depth than we've had in a while. The last couple of years we were basically going after the second seed. This year all we've talked about it trying to get the first place seed. I like our chances."

Said Coon: "Beating JA was a big win for us. It gave us a lot of confidence. We've got another big game coming up with Prep, hopefully we can get that one, too."

Bringing home a soccer championship to her alma mater would be extra special for Stratton, who won an Overall title in basketball player in 2007, her senior year. She was an All-Star in soccer, lettered in soccer and went on the play collegiately at Mississippi State. But she doesn't own a championship in her beloved sport yet.

"All the girls talk about getting their pictures up on the cafeteria wall," she said. "I have that same desire. I want my picture on the wall in a soccer jersey. This team has the talent to make that happen."

Stratton has a lot happening these days. She's a wife, a mother to one child with another on the way, and she teaches six math classes a day along with her coaching responsibilities. How does she balance it all? It starts with a good support system, led by her husband Matt.

"It's definitely hard to balance it all, but I have a great husband who helps out a lot," she said. "And I have really good assistant coaches. Our family, of course. The girls have been great, too, especially my two seniors. They've been a big help."

Matt often brings Bo to the home games so that their son can watch mom coach. Mother and son usually find time, during the junior varsity game, to share dinner together on the bench. That dinner usually consists of a Chick-fil-A sandwich, a ring pop, and a Gatorade from the concession stand.

Finding that balance between taking care of one ball of energy, while pregnant with another, and coaching her team is no easy task. Stratton has been able to pull it off, though, while also developing motherly instincts for her players, especially after giving birth the first time. Her other baby is indeed the MRA girls soccer program.

"People ask me all the time how many kids I have I usually say I have one with another one on the way, but I really have 34," Stratton said. "I love each of the girls as my own daughter, inside and outside of soccer."